Music To My Ears

When I was a teenager I was usually the odd one out when it came to listening to music. I preferred to listen to artists of the 60's, 70's and 80's. I didn't even know much of the current music of the time, which happened to be the 90's. And I still maintain that I made the right choice. The 90's produced a lot of crap music with a few decent bands in between. I usually found myself agreeing with the music the adult was playing while driving me and my friends around over what my friends were begging to listen to. I was so glad when the 90's were finally over and the music gradually started to improve. There is still a lot of horrible stuff out there (country, rap, R&B, anything auto-tuned), but a lot of good stuff has come around too (indie rock, indie pop).

It took me until about the early 2000's to start listening to current bands, and even then it wasn't necessarily mainstream. I'm not one, and never have been one, to follow the crowd when it comes to music. Yes I like bands that are popular now, but I feel I discovered their music a lot of the time on my own. Case in point: I first discovered Maroon 5 when they were unknown. They had one song that had just shown up on the radio and virtually no one knew who they were. I had the opportunity to see them open for Sugar Ray (90's crap) who opened for Matchbox Twenty (90's gold).  Ever since, Maroon 5 has been dear to my heart because I discovered them on my own and listened to them before they went huge.

Anyway getting back on task, I'm a product of the 80's and find myself reverting to this particular era of music the most as it was always playing while growing up. I tend to lean more towards the new wave genre of the 80's, but I also love the hair band rock, the sappy love songs, the pop stars, and of course punk. Some of the best one-hit wonders came out of this decade, and they were awesome. 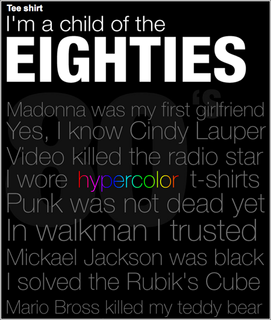 The 70's provided some of the best rock bands to have ever graced us with their presence. And they can be pretentious enough in my mind because they earned it. When I was in high school I was able to see a lot of these great bands live. If there's anything I will give credit to the 90's for, is that it was the decade of 70's band revivals. To name a few of the bands I saw; Styx, Boston, Kansas, America, Jethro Tull, Pat Benatar, and The Moody Blues (not by choice). And about half I was able to see for free (I was really good at winning radio contests at the time).

The 60's gave us some of the most genius artists of all time, and I'm not just saying this because my favorite band derives from this era (*cough cough* The Beatles *cough*). To name a few others; The Doors, Janis Joplin, Jimi Hendrix, The Who, ELO, God a.ka. Eric Clapton, and so on helped shape music to what it is today. They each took a risk forming their own sound to which even today is repeated in new music.

Anyway the point of this post was to explain my love for music and I will from time to time focus a post on a particular band, decade or genre because it's good fun, and I hope I can educate and motivate a few to branch out from their comfort zone, and hear some damn good music.

Email ThisBlogThis!Share to TwitterShare to FacebookShare to Pinterest
Labels: Music