Last week I embarked on an adventure with my bestie/roommate/co-worker Amber and her boyfriend Peyton (and yes Amber you will be referred to those three titles all together every time). This adventure took us into the world of Karate. A four week course to learn how to strengthen our bodies and minds to take on an attacker. Perfect right?

Well let me tell you, the first lesson was a private class, and it was awesome. The second lesson was a class with all different belt levels. And dear lord that was the most intense workout I've done probably ever. Insane! For three days after, my legs felt as if they were both going to turn into mush and also rip apart, my abs started to scream, and I moved like an 80 year old arthritic lady. So pathetic. The only consolation was that Amber felt the same way. Thank God I wasn't alone. But since then we haven't been back. One because the next lesson was two days later, and there was no way I was going to be doing kicks, when I couldn't even go down the stairs without tears welling in my eyes. And two, illness took over us all, which is no bueno in any situation.

Needless to say, we have a lesson tonight and I'm terrified! Not of the class itself, but of the pain I will endure afterward for three ungodly days.Someone please tell me it's worth it! I'm hoping by the end of our four week course I will be able to kick the shit out of someone. I won't be satisfied until that is a reality. Good luck to me! 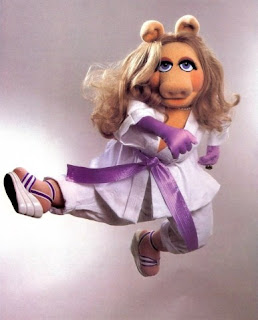 This is the closest representation of me I could
find doing kicks. I'm ok with that.

Written by Chryshele at 2:55 PM

Email ThisBlogThis!Share to TwitterShare to FacebookShare to Pinterest
Labels: Karate