Book Review: Harry Potter & The Order of the Phoenix 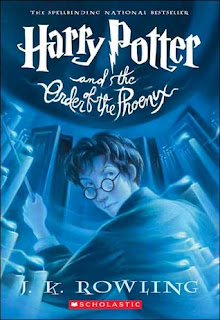 Well I have finished Harry Potter and the Order of the Phoenix. Well I finished it on Tuesday to be exact. And I just need to say I loved this book!

For those that don't know, or don't remember (because let's face it, I took a long reading break), I have been reading the Harry Potter series for the first time. I actually made it a New Year's goal this year to finish the series before year end. And by golly I think I might do it.


This book had me captivated from the very beginning. I did not want to put it down. There was so much of this book left out of the movie (and honestly I've only seen the movie once), that it felt like it was all for the first time. From the Dursley's to Harry's hearing for using magic in front of a muggle, to Umbridge (ultra bitch) to the Death Eaters, to Voldemort, I was pretty much pissed off the entire time I read the book. I was so angry for Harry! I know they're only characters in a book, but you get so involved that they become your family. I wanted to kill Umbridge. If I were Harry, I would have said "fuck you all" and done the death curse on her. It's a good thing I'm not Harry. The book would have been a lot shorter, and less interesting. The politics in this book reminded me why I don't like politics or religion. You always get the crazies. Fudge was so frustrating in this book. His constant need for power and adoration was nauseating, and only fueled my continual anger while reading. Harry was portrayed how a teenager would have been at that age. The teen angst, "I hate the world" attitude, is so typical of a 15 year old, and J.K. in my opinion captured it perfectly. And losing Sirius was heartbreaking. Needless to say that although I was angry the entire time I read the book, it was by far my favorite so far. I still have two more books to read, so that could change.


I've started reading Half-Blood Prince and am about 230 pages in, I'll be giving you my thoughts on that when I'm done.


Again I have no idea why my words are highlighted, and frankly it's making me Hulk-out a bit.
Written by Chryshele at 4:29 PM