This summer's TV has been kind of lackluster, or I'm just not as into it as in years past. Either way, I've been living on Netflix most of the summer. And knowing how big of a TV buff I am, you know that I've watched at least a couple series already. So what have I been watching? I decided to go back in time to the year 1996 and relive the styles and trends of my high school years. The only difference was that I wasn't fighting/killing vampires and demons like Buffy. Nor was I making out with any hot vampires either. That part makes me a little sad. Anyway after I finished Buffy the Vampire Slayer, I immediately went and watched Angel. I had never seen either series, aside from a handful of Buffy episodes here and there over the years. So I thought this was the perfect chance to watch some cult classics. And now I think I'll share with you my thoughts on the shows. If you've never seen them yourself, some of this may be spoiler material, and if you have I would love to hear your thoughts on the shows too. 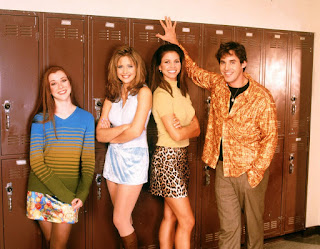 The relationship between Buffy and Angel was what every girl dreams of, aside from the being dead part. Stefanie Meyer has nothing on Joss Whedon when it comes to the story of a human girl falling in love with a vampire. Frankly I'm pretty sure Meyer ripped it off. A dream my ass...she probably watched Buffy one night and got the idea to rewrite the story. At least this is how I see it playing out. Angel and Buffy were the first Bella and Edward. And so much better too! I am still sad that they didn't end up together though. But while they were together, I shipped it so much. 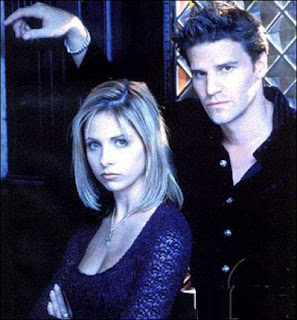 But then comes along Spike after Angel ditches out and moves to LA. Spike is a complete dick to Buffy at first, you know because he has no soul and likes to kill slayers, but then he gets this chip put in his head which holds him back (and later a soul of his own), and then randomly decides he's in love with Buffy. And then I have a whole new pairing to ship. Forget Willow and Tara or Xander and Anya, those were meh compared to how hot and forbidden the Spike and Buffy relationship was to watch. This show went from being a show about an innocent high school girl who is called upon to kill vampires to this adult show of steamy sex scenes with fighting and killing thrown in.

I liked the majority of the characters; Xander had to grow on me. He annoyed me at first because he felt he owned Buffy and would get upset if she was with another guy. Eventually when he got himself a girlfriend, the one and only Cordelia, only then did he start to let up on the Buffy obsession. He was still the protective best friend, but he didn't treat her as property anymore. I loved Willow from the beginning and then when she came out and started seeing Tara, I loved her even more. That was a risky move on Whedon's part at that time, and I'm so glad he took it. I feel it helped open doors to having more openly gay characters on TV. There's still a lot of progress to make, but I think this show really helped that.

I wasn't much of a fan of Anya, she honestly drove me bat shit crazy most of the time. There were some moments that I thought she was good for a comedic relief, but that was Xander's territory, so it couldn't happen often. I absolutely adored Giles, but who doesn't love Anthony Stewart Head? Having watched him on Merlin before this, it was hard to break from wanting to call him Uther, but it didn't take long for me to start calling him Giles and loving him. I hated that he left the show in the last couple seasons. The father/ daughter relationship between him and Buffy was something I really adored watching.

Cordelia was one I could take or leave while she was on Buffy. She was the typical cheerleader personality, but when she started dating Xander, I saw the softer side of her. It wasn't much, but I started to like her more. Faith was one I really didn't care for, and I thought was given too much air time personally. I know that in the end she becomes good and helps save the world, but I really didn't like her. Now Spike I loved. Who doesn't love a bad boy? It didn't hurt that he was sexy either. At first I wasn't sure about the whole Buffy/Spike thing, but as it grew deeper, I wanted nothing more. And at the end of the series when Angel shows up to help, it broke my heart to see Spike hurt by Buffy's actions toward Angel. Angel and Buffy are each other's true love and I ship that forever, but I also ship Spike and Buffy which made me so torn. And still does. 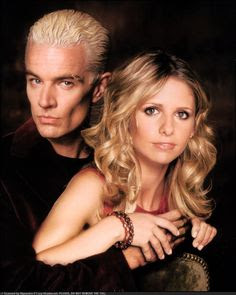 Buffy's mom was an integral part of the show in the beginning, but obviously as you grow older, you don't need your parents as much and so her mom was less and less apart of her daily life, but when little sister came into the picture (who I could have done without) and Joyce started getting ill, Buffy moved back home to be with her family. The most gut wrenching and I would have to say hardest episode I've seen since the death of Nate Fisher on Six Feet Under is when Joyce dies. So unexpected (although I already knew) and so very very hard to watch. The episode was so well done, and without any music whatsoever through the entire episode, made it eerie to watch through tear-filled eyes. My friend Jordan hasn't been able to bring herself to finish the series after watching that episode, it affected her so much. And honestly I can't blame her. I had to take a breather after watching the episode and gather myself. Why does a TV show have to do that to you?

The show overall was cheesy, funny, heart breaking, scary, and just a wild ride that I loved. Not to mention it has a kick-ass theme song. I really don't know how I missed out on this show when it was airing on TV. And I'm ashamed it took me this long to watch it, but man am I glad I did. It probably has to be in my top 10 favorite shows. And it's a show I could watch over and over again which says a lot. 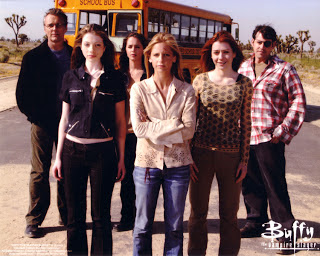 How did you feel about the show? I know that even to this day, the show is hailed as one of the best cult shows on TV. Do you agree?

And because this turned out so long, I will split this into a two-parter and post separately about Angel. So stay tuned!