Now moving on to my thoughts about the series Angel.  Again there will be spoilers, so if you haven't seen the series and plan to, please stop reading now and go watch.


This series began after the third season of Buffy, and follows her one true love Angel, the 200+ old vampire with a soul, as he leaves Sunnydale and moves to LA to continue his mission of redemption for his past sins by saving humans from demons. His choice for this move is to save Buffy from the pain that seemed to follow their on and off again relationship. 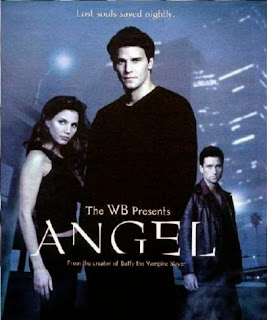 Going into the Buffy universe I knew that Angel eventually left Sunnydale, but didn't know how and I was always interested in watching the show, but I felt that I would need to watch Buffy first in order to really appreciate Angel. And I was right, sort of. I wish I had started watching Angel right after the third season of Buffy and alternated between the shows through the rest of each series. Instead I watched all of Buffy and then all of Angel and that made me wonder what the heck was going on sometimes when watching Buffy and then have to remember what the heck happened when watching Angel. I do have to give props to Whedon and his crew for the continuity between the two shows. Even though toward the end when Buffy moved TV stations and they wouldn't allow for guest appearances on either show anymore (aside from Willow), they still stayed true to both stories. So with this being said I will go into what I liked and disliked about the show.

As I said in my last post, Cordelia was a take it or leave it character for me, but on Angel she grew into someone I really enjoyed. Not only did she help Angel with his redemption mission, but she also became a much better person. Although the fourth season story line totally went weird and I'm still not entirely sure what the thought process on that one was, she became a like-able character.

Along with Cordy in the first season there was also Doyle, well for the first half of season one. I really liked Doyle, and I don't know the history and reasoning as to why they killed his character off so early in the series. I personally would have liked to see him continue with the series.

With Doyle leaving, this left a gap in the group. So enters Wesley Windham Price. Wesley was first seen on Buffy as the new Watcher for both Buffy and Faith after Giles was fired. He was a whiny British pansy boy to put it lightly when we first met his character, but when he joined Angel's team, we found that he's been working on toughening up his image. He left the Watcher's Counsel and became a self-proclaimed Rogue Demon Hunter. I have to admit, I love Wesley so much. He was a great comic relief at the beginning of the series and then turned into a serious bad-ass by the end of the series. He was dealt a bad hand for trying to be the good guy, and I swear he was always the one to be seriously injured. But in the end he proved his own and paid the ultimate price to try and save the world. And I may have shed a few tears. RIP Wesley. Gunn was an alright character. At times I liked him and at times I didn't. He was kind of all over the place on whether he wanted to be loyal to Angel or not. To give Gunn the benefit of the doubt, Angel didn't make it easy at times to be liked, but man Gunn kind of bugged. He also had no qualms about going after a girl he knew Wesley had feelings for. I always felt that Fred and Wesley fit better than Gunn and Fred. And it breaks my heart that Wesley never really got the chance he should have with Fred.

And speaking of Fred, she's just adorable. I think she was a good addition to the group, having been stranded in a hell dimension for five years and nearly losing her mind while there, and then being rescued and brought back by Angel and the crew. She became the brains of the operation when it came to the science factor of fighting demons. She even had to pick up the slack and play historian when Wesley was banished and disowned for kidnapping Angel's son. Everyone loved Fred, and rightfully so. I didn't care for them killing off her character and bringing in the Allyria. Yeah she looked like Fred, but it wasn't Fred. Tears were shed as Wesley held dying Fred in his arms. RIP Fred.

And then came Angel's son. This was a weird addition to the group, starting out as a little baby born to two vampires (Angel and Darla) and then being kidnapped by Wesley because of a prophecy saying the "Father will kill the Son", and subsequently being kidnapped again by Holts who has a vendetta against Angel for killing his family 200 years prior, and then ending up in a hell dimension raised by Holts, returns as an Angel-hating-demon-fighting-teenager. Phew confused yet? Oh it gets better. 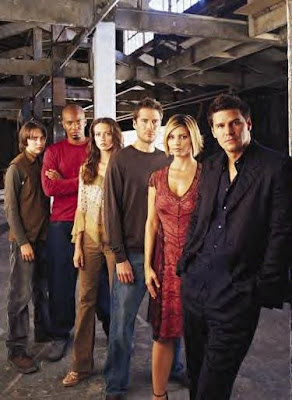 But first I need to mention Lorne, the empathic green-skinned singing demon from another hell dimension of his own called Pailea (I have no idea if I spelled that correctly). There's nothing to not love about Lorne honestly. He was too nice for his own good sometimes and found himself in tough predicaments a lot of the time. But he's a favorite of mine. He was totally useful when it came to needing to know the future, and it was always funny to watch someone break out in song so he could read them. Genius. Sadly toward the end of the show, the fun loving Lorne we knew was gone and what was left was a hollow remnant of what used to be. The workings of evil had taken a toll on him, and you see that in the last scene he's in.

The series' story line kind of went from good to bad to alright, and I think that's why it only lasted five seasons. Regardless I loved watching the show, and would watch it again. I could do without some of the weird twists that occurred, and when I say weird I mean it. For one Angel and Darla having a child. This child growing up and then sleeping with Cordelia who has just returned from being a higher power, and impregnating her with the ultimate demon spawn which ends up putting her in a coma and then eventually dying. More tears were shed for that death too. RIP Cordelia.

By the fifth season, it got slightly better, because it had Spike. Yeah he didn't die! Well kind of. The banter between Angel and Spike made the fifth season a lot better than it would have been. I especially enjoyed the episode where they go to Italy to retrieve a demon head and knowing that Buffy is there, they hunt her down without any luck. The competition of who Buffy loves more was pretty entertaining. I was kind of sad that Buffy never found out Spike was still alive or that we got to see Angel and Buffy together once more. I've read on Wiki and IMDB that the stories continue for both Buffy and Angel in the form of graphic novels. I'm not a huge comic book fan, but I may just have to become one. I'm dying to know how the stories continue!

Overall I did like the show and am glad I watched it. There were all the happy, sad, dark, sweet and evil moments that you would expect from the Buffyverse. Plus it doesn't hurt to have a good looking lead. Just sayin'.

Written by Chryshele at 4:00 PM