With sadness I am yet again not at Comic-Con this year. I have wanted to go every year for a very long time and have never had the chance. This year proves to be the year I've most wanted to attend. A big chunk of my shows are hosting panels there and all of the exclusive swag and previews are killing me to not be able to have and see. Well luckily some things are being released soon after the debut at Comic-Con, and this has helped a little, but I still want to have the amazing experience of hearing the stars of my shows discuss upcoming stories. And I know it would be amazing.

I'm going to share a couple things that have happened so far at Comic-Con here on this very blog. I feel like if I can cover some of the happenings for others in one place it will help the sadness of the others that couldn't be in attendance.

So here we go:

First Two Minutes of Dexter Season Premiere: (Thanks Jordan for finding this you rock!) 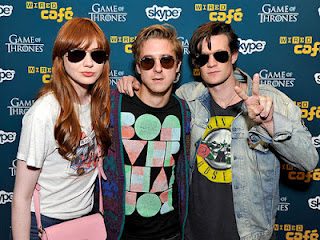 Once Upon A Time Season 2 Preview:

So John Barrowman co-hosted the live coverage of the Comic-Con on G4. It was sweet! Four hours of interviews, previews and floor coverage. Although some of it was cheesy and dumb, it was the best I could get with not being there. I'm just glad they covered it just for me this year.

Written by Chryshele at 3:06 PM

Email ThisBlogThis!Share to TwitterShare to FacebookShare to Pinterest
Labels: Comic-Con, Dexter, Doctor Who, Firefly, Once Upon A Time, The Walking Dead