It's no secret that the 10th Doctor is my favorite. David Tennant is an amazing actor with a face that you can read every emotion going through his character's mind with the slightest change in facial expression. I love the tortured aspect of the 10th Doctor, the heart(s) that David brought to the character, and it's no lie I had a hard time when the 10th Doctor's time ran out. Don't get me wrong I like the 11th Doctor quite a bit as well, Matt Smith does an amazing job too, but in a different way. I'm serious when I say David Tennant left some gigantic shoes to fill. Two seasons later, I'm still longing for the 10th Doctor (honestly he's so much easier on the eyes). I have a crush for sure. 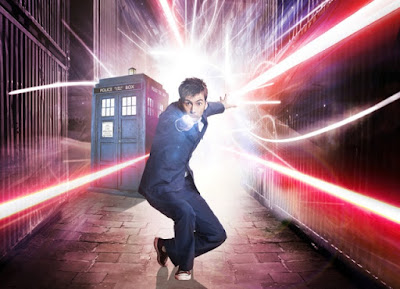 I came across a great little video, that is not only touching knowing the background behind it, but also hilarious because of the fact that the song ended up being a running theme behind the scenes for all three seasons and four specials that was the 10th Doctor's span. This video was made by all involved in making the show during David's time, and this was shown on his last day of filming as a farewell gift. Enjoy!


I understand that not everyone will understand what I speak of, but this is my attempt to add to the intrigue.
Written by Chryshele at 9:04 PM

Email ThisBlogThis!Share to TwitterShare to FacebookShare to Pinterest
Labels: David Tennant, Doctor Who, The Doctor