I've been trying out a new hobby as of late. I'm sure a lot of you have seen the nail art videos that plague the internets, mainly Facebook, and yes I was sucked in. But in my defense, I am an artist, well a wanna-be-artist, and so to me getting artsy on a nail is just a smaller canvas really. I've only been doing this for a couple months now, and mostly it's been on my own nails, which has been a major thing for me in and of itself (I don't like my nails painted. I know go figure). But I'm starting to feel like I'm actually getting the hang of this thing, and I enjoy trying to come up with new designs. So I thought I'd share some of the ones I've done thus far, and will post an update from time to time of additional designs I come up with.

So this is my very first attempt. I hadn't painted my own nails, let alone any one else's in years and years, so for a first try, I didn't do too shabby: 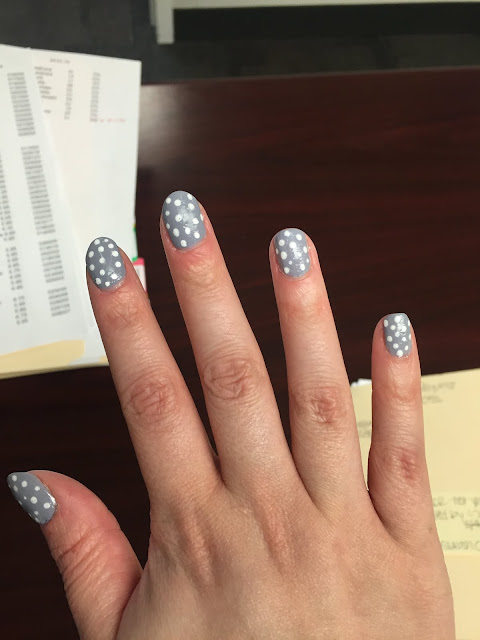 I then attempted to do my friend Jordan's nails, and quickly learned I'm not that great on someone else. I have better control on my own nails, which is odd. This was my first try at a sponge technique which came out quite well for a first try. This was also my first attempt at using strip tape to create a design, and learned I need to let the paint dry a little longer before removing the strips. It's all a learning process for sure! 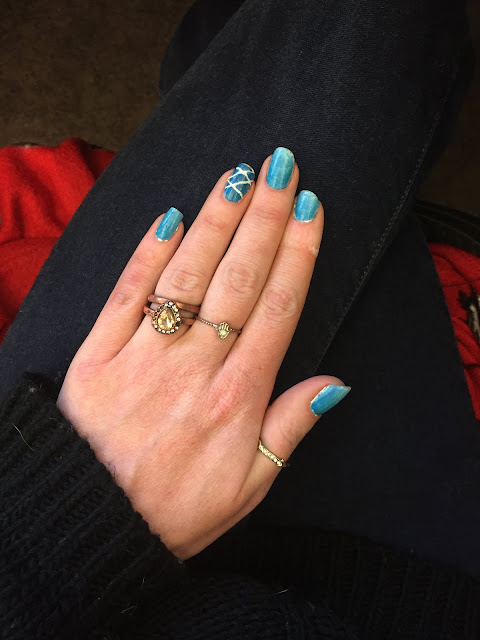 I also learned how to take a better picture of the finished product. I got a little better with the sponge technique as well, and learned that when painting over strips, that sponging is much more kind: 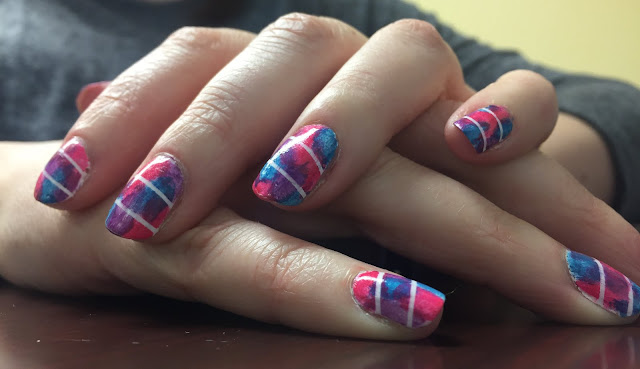 My next design I wanted to try a different take on the french tip. I used strip tape to give the tip effect, I also have this cool "splatter" nail polish that I layered over the red: 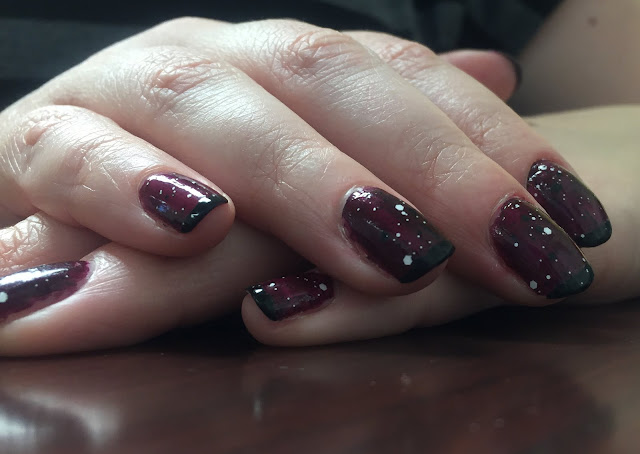 I've been trying to get better with the stamp technique, which is actually quite difficult! Don't let those videos fool you, the stamps are hard. So this was my first stamp design that turned out decent enough I didn't feel like I had to wipe it off: 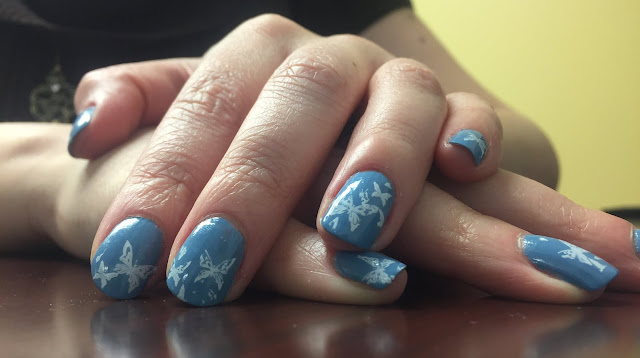 And finally we're to the design I did last night. It's again a stamp design because I'm determined to perfect this technique, since it's so challenging: 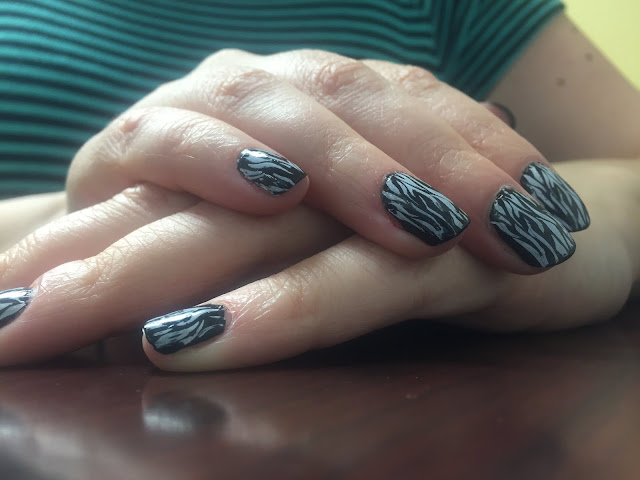 Thanks for indulging me in this new little hobby of mine! And for those wondering, each painting has lasted me nearly two weeks, a few only a little over a week, but a clear base coat and a couple clear top coats do wonders for longevity.

Here are a few more that I've done this year. I've kind of had to give my nails a rest, as they just don't handle the painting so well. Is this normal for others? Anyway, enjoy!


This one involves the use of newspaper. After watching a video I thought I'd give it a try. It's actually quite simple! You just need some newspaper and rubbing alcohol, and voila! 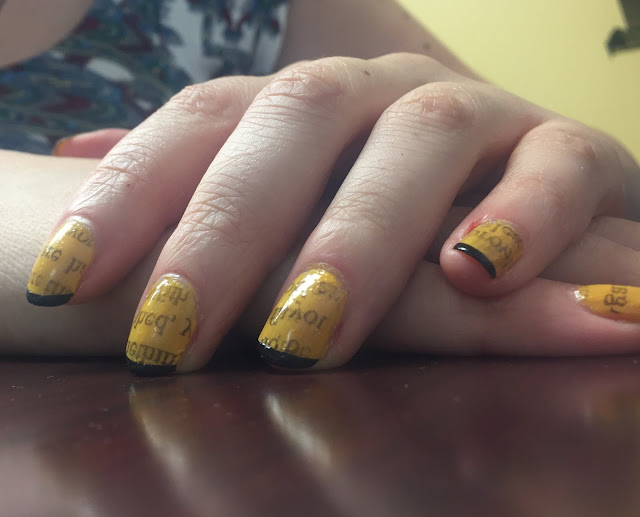 This one was a quickie as I had Salt Lake Comic Con to go to, and a picture with Stephen Amell.  I wanted something green (The Green Arrow) and sparkly on the good old middle finger, as I had decided we'd pose flipping the bird to "F Cancer".  The picture turned out great even if you can't really see my nails. I know, and that's all that matters! 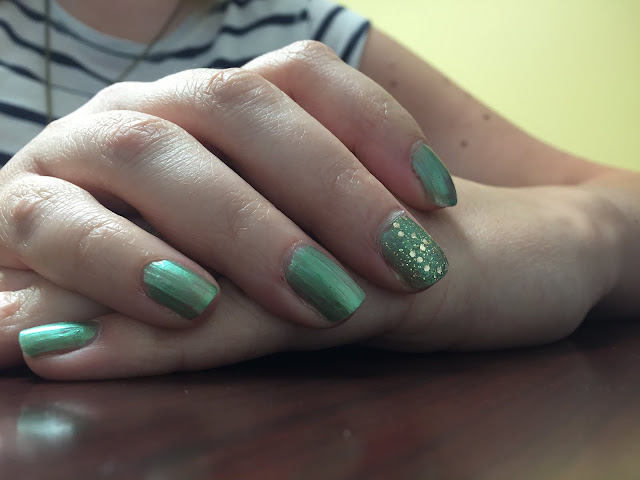 Fall is here! And this was my first fall attempt. I love the copper color, and a fun little stamp on the ring finger and thumb added just the right accent. 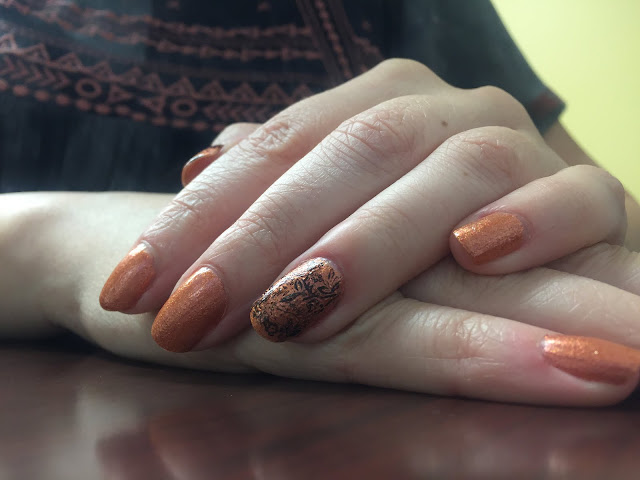 I think this design is a perfect winter design, so ignore the fact that I did it in the summer. I'd just bought the paint and wanted to give it a whirl. With a little silver strip in the middle and some glittery paint to add some fun, I loved how this one turned out. 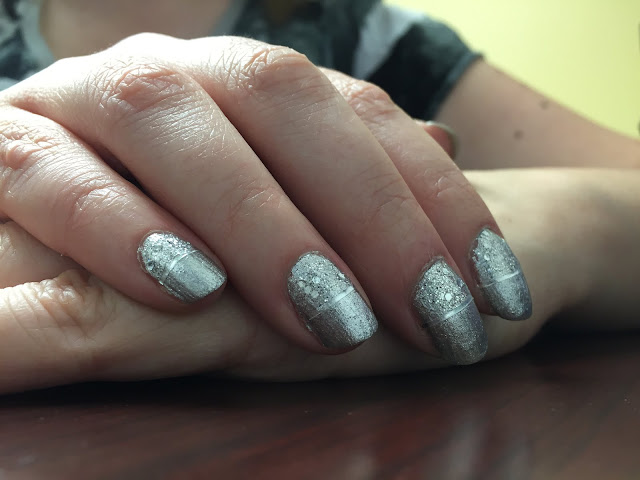