TV Review: Doctor Who: The Name of The Doctor Thoughts (Spoilers!)

So the season finale of Doctor Who happened this weekend and with it came a lot of emotions. Some good, some sad, and some I'm just not sure. I do have to say though, that this episode was by far the best episode of the entire season. I feel bad for Jenna Louise Coleman (Clara) for coming into a show where the episodes written around her character were only sub par. But this finale made up for everything, and all of the assumptions and theories of whom Clara is to The Doctor were quashed. No one saw it coming and that's what made this so much better.

I have to give props to the editors of this episode for helping mesh the Classic Who with New Who. It made me a giddy little girl to see Clara having been with every version of the Doctor at some point in his life. I mean Clara at one point was a Time Lady! That is a big deal. And she was at the library where 10 had saved River into the database!

Speaking of River, having to say goodbye to her officially was a bittersweet moment. We've always known since we met her that we were going to have to say goodbye. I mean she dies the first time we meet her, but knowing that was most likely the last time we will see her, made me a little sad. I know her timeline is all wibbly-wobbly and The Doctor never met her in order, and this could mean maybe somewhere down the road he runs into her again, but this felt final. The final chapter in the Pond storyline. Goodbye River Song, RIP.

Now the part of the episode that made me go WTF and wonder if I should be mad, is at the end when The Doctor's biggest secret is revealed, and it's not his name. It's the fact that there is another regeneration of him that he has decided to forget because this regeneration had been involved in the Time War and killed his own people. And therefore The Doctor doesn't think this regeneration of himself worthy of being called The Doctor. Where this bothers me is that Moffatt is playing god again. He has done everything in his power to erase the Davies era. He has decided not only to create a new regeneration, but mess with what the fandom has become accustomed to. We all know that The Doctor only has 12 regenerations in his lifespan. And with this new revelation, we now see that Matt Smith's Doctor may possibly be the 12th, not the 11th regeneration. I. don't. like. this. at. all.

Now the other reason Moffatt has decided to go this way is because Christopher Eccleston decided not to participate in the 50th anniversary special, so Moffatt went another way. We are aware that Eccleston is not the biggest fan of his role he played in the Whoniverse, but this doesn't mean Moffatt gets to mess with the history anymore than he already has. This really does bother me. It's no secret I'm not a Moffatt fan and it worries me what he's doing to the Whoniverse.  With this being said, I am also intrigued to see where he plans to go with this. The 50th anniversary special is something I'm looking forward to more than anything and November can't come soon enough.

I also thought I would share a few of the most important moments from the finale in gif format (credit goes to those who made them):

And speaking of all the 50th Anniversary excitement, a really cool thing happened. Apparently there was a shipping mistake in the issuance of the 7th season of Doctor Who on dvd. They were shipped prematurely to the US, and about 200 people received it a week before they should have. This led to a possible leak of this episode and the potential ruining of a huge secret. But because this fandom rocks, the secret was never leaked, not a single moment was blown. This is amazing people. And because the fandom is so awesome, we were rewarded with a special behind the scenes video (see below). This anniversary special is going to be so damn awesome.

How adorable are they?? I ship them whole-heartedly. That's not creepy right?  I'm also including a couple pics that have been released of the filming of the special. These pictures make me smile every time. I love this show so much. 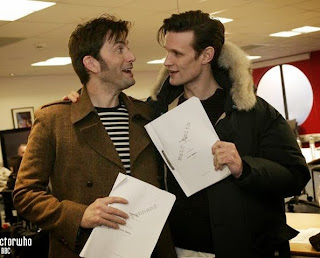 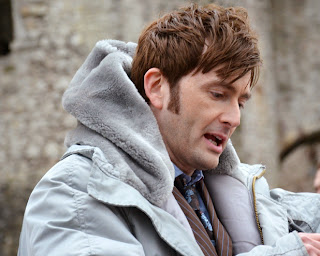 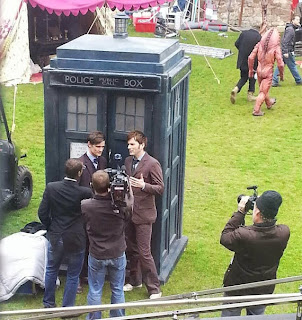 Email ThisBlogThis!Share to TwitterShare to FacebookShare to Pinterest
Labels: Doctor Who